We Love Reading at the MIT science and technology conference 2018 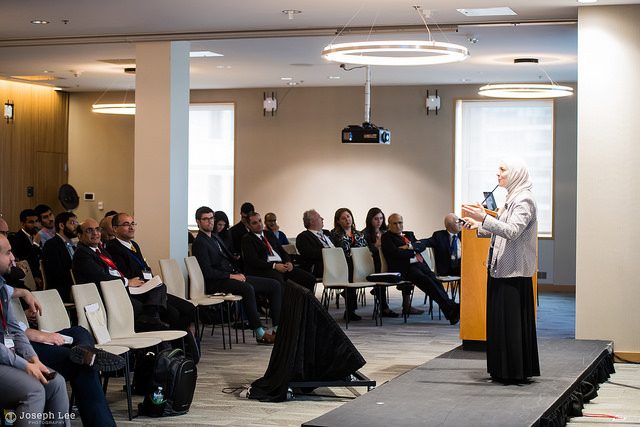 Dr. Rana Dajani, the founder and Manager of Taghyeer Organization, Represented We Love Reading in MIT science and technology conference 2018, which was organized by MIT Arab student organization. Dr. Rana was a key note speaker at the conference and shared the story of how We Love Reading began in a small neighborhood in Jordan, which evolved to spread to more than 38 countries.

The Annual Science and Technology Award, SCITECH, has been a flagship event of MIT’s Arab Students’ Organization (ASO). At SCITECH, the ASO has been celebrating the contributions of a Lifetime Achievement Award winner, an Arab or Arab-American who had a lasting imprint on science and technology. And this year Dr. Rana was privileged to be awarded a shield in recognition for her work as a scientist and an activist in children rights to read and be read to.

WLR had an exhibit volunteers from MIT and other universities in Boston signing up to help WLR develop its mobile app and online course.

Among the speakers were Talal Abu Ghazaleh, Senator at the Jordanian Upper House, Vice-Chair of UN Global Compact, chairman and founder of the Talal Abu-Ghazaleh Organization, Abdallah S. Jummah, Former President & CEO of Saudi Aramco, Chairman of the Board of the Saudi Investment Bank and Co-Chairman of the U.S.-Saudi Arabian Business Council, and many other influential and prolific leaders in tech industrial.

You didn’t miss anything, you can check all the conference on the SciTech MIT ASO Youtube channel.