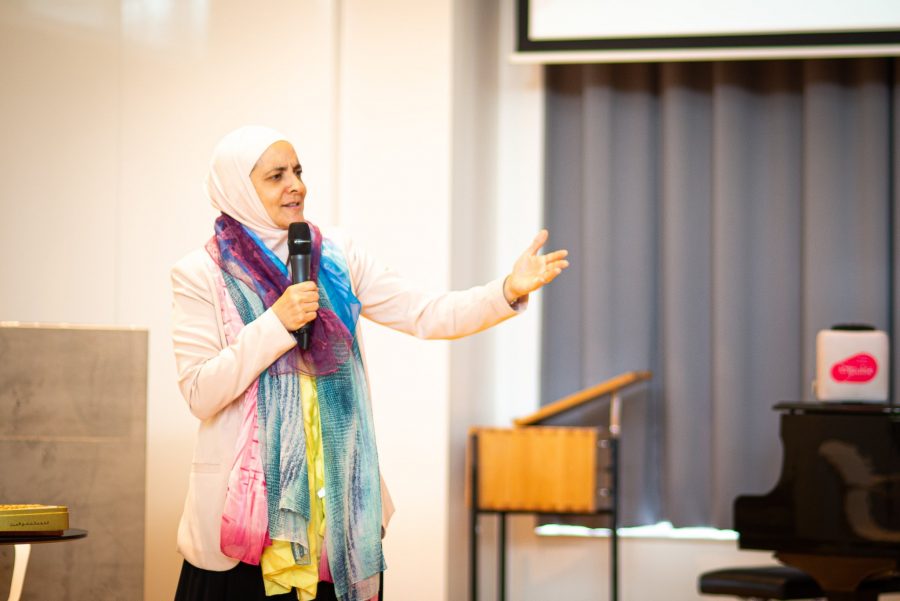 ” In June 2019, Wageningen Young Academy invited Professor Rana Dajani to Wageningen. Dr. Rana Dajani is a Jordanian molecular biologist and Associate Professor at Hashemite University. She has a fellowship at the Radcliffe Institute for Advanced Study at Harvard University and an Eisenhower Fellowship. Dr. Dajani is also a Fulbright scholar alumna, having received two Fulbright awards. She was ranked #13 among the “100 Most Powerful Arab Women” in CEO Middle East Magazine.

Dr. Dajani came to WUR and at 12.30 she had her first event, which was part of Wageningen Young Academy’s book club On the Same Page. The speaker’s corner at Impulse was full with an audience ready to hear about our guest speaker. As part of this initiative, Dr. Dajani was invited to talk about her recent book “Five Scarves”. Rather than doing a formal presentation about her book, she completely engaged the audience with a series of personal stories about education, science, entrepreneurship, feminism, and motherhood, each representing a scarf, which not only she discussed metaphorically, but also wore one by one. This was followed by an interview by WYA member Betina Piqueras-Fiszman which gave her the opportunity to enter more in detail on how she felt while pursuing her different ambitions in life and her thoughts on current ongoing issues related to the five scarves.

Dajani’s second event was scheduled from 5.30 to 7 pm In Orion. The ‘Waaierzaal’ was well occupied and Dajani took us on a journey through her life. Taking the five scarves as a metaphor, Dajani described the distinctive roles she plays in life and in particular, how she combines these, with emphasis on her position as a scientist in Jordan. She explained her choices in life, including her decision to do a PhD in the United States while being pregnant of her fourth child, the decision her husband took to follow her, and her decision to come back to Jordan to start an independent career in science after obtaining her PhD. Although working as a scientist in Jordan is not easy, she has been very successful and her work, both in science and in science-related political and societal issues has had an impact. Her choice to work on the population genetics of two isolated ethnic populations in Jordan has made it into Nature, and she has played an active role in legislation of stem-cell research in Jordan, which now is among the more progressive legislations in the world. After her talk, there was a lively discussion, with questions from a heart-warming number students with an Islamic background. Many of the questions hinted at Dajani’s position in the interaction between science and religion. Unfortunately, at 7 the Orion building closed and the session had to be closed, but some discussions between Dajani and students continued outside Orion.

The following day Dr. Dajani visited the Pantarijn secondary school in Wageningen. We met with the school director and several students to plan the day. The students then gave us a tour of the school. A group of about 90 students with interests in cultural history, philosophy, and/or sociology signed up to participate in the main event. Several teachers had helped prepare the students. In the end, Rana interacted with the group for about 2 hours: speaking, telling stories, and asking and answering questions. We had lunch together with the school director and a small group of teachers, other staff members, and students. Lastly, we met with teachers and about 20 students, mostly from Syria, in the ‘international connection class’ (ISK, or internationale schakelklas) of Pantarijn. This class is intended ‘to bridge the gap’ for foreign students who want to go to high school in the Netherlands, but do not master Dutch yet or have other knowledge or skills gaps. Dr. Dajani gave an Arabic language presentation for over an hour. The students asked questions, took selfies with her, and were highly engaged and appreciative of her visit.

It was a marvelous experience to be able to learn from such a role model and we are convinced that she inspired all the audience.”

Like Loading...
Previous PostDr. Rana Dajani (Founder of WLR) is one of th...
Next PostWLR's research with Brown University was ...

This site uses Akismet to reduce spam. Learn how your comment data is processed.